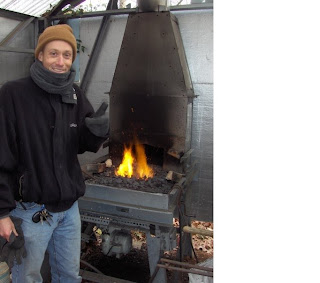 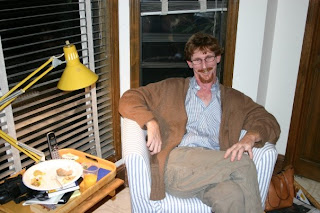 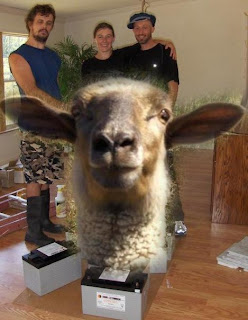 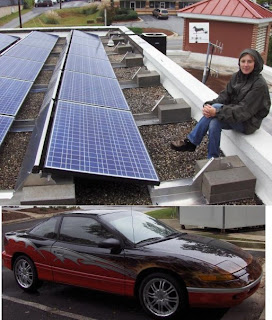 In Septemeber I was riding my bike up a hill on the side-walk, and I approached a man walking in the same direction. I called to him and asked him to please move out of my way, and as I passed him I said "Thank you!". I was writing a note for my brother who works at a coffee shop, when the man, Scott Points, approached me after following me up the hill. He bought me some tea and we talked. He asked me out to lunch, and we went the next day. I told him about my trailer plan and he offered to help. The first thing we did together was drive to Brenton (the middle of nowhere) South Carolina; down a long country road, take a right, down a long country road, past a grave-yard, take a left, further down the road to a trailer. We knocked on the door and big Russian Mama, in a leopard print house coat answered. We asked for Yuri, and she called him, her mid-thirties palsy ed son. He struggled into his rubber boots and lead us back through the sheep pen, through the chicken pen, down a path through the bushes to a half built trailer, inside of which were eight brand new SunExtender 12 volt batteries he was selling through Craig's List for $100 each.
The next thing we did was meet together with Drew Bowen, an electrical engineer and red-headed pirate I was recommended to by the manager at the bank. We had met once and discussed this project, and he had agreed to take us on our own personal tour of some of the commercial and residential solar systems he had designed and installed, and then we went to an appointment he had that afternoon with the city inspector for a animal clinic that was ready to go completely off grid!
http://www.drewbowenelectric.com/
http://www.craigslist.org/
http://www.sunxtender.com/solarseries.php?id=3
http://www.splendide.com/apps_rv.htm
http://www.firehall4.com/
The next item acquired was a Splendid washer/dryer all in one combo unit, also found through Craig's List. My friend Steven Trimmer and I drove up to Blairesville one rainy Wednesday to pick it up, and the old fella who sold it to me wouldn't let me help get it into the van because I was " Just a tender, delicate little thing." Sheesh!
Posted by Gretchen Elsner at 5:28 PM