Roll-Home in the bay in Athens! 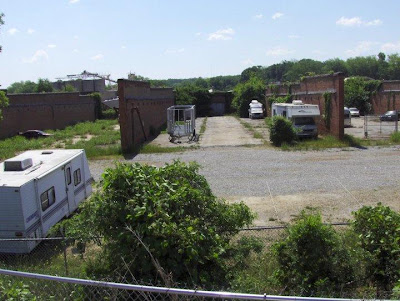 It's been an eventful few weeks. Scott and I went up to Cartersville three weeks ago, and we found Bill quite hostile after a long day of drinking. With-in 15 minutes of our being there he had attacked me, grabbing me by the face and jacket. I put my cigarette out in his face in an attempt to back him off, to no avail. He didn't release me until Scott had separated us. He was all hot and bothered because when he had clamped the roof truss pattern we had made into place and taken some measurements the top of the trailer exceeded the 13' allowance, and he wanted to talk about re-designing the whole structure. I told him we should take some more measurements and think about the best way to proceed. He became angry very quickly, and under the influence of the booze he went quite insane. Scott and I went down the hill and confronted Mary, his estranged wife, with the incident, and it was a long needed conversation between us all, really clearing the air, and also extending our help to her in a situation she has been steadily watching worsen for many many years. When we all three went up the hill to confront Bill we found the house empty and his gun missing. Mary got a hold of him on the cell phone (after dark) to find that he had gone off into the woods with his gun.

I find it interesting, confusing, alarming and poignant that I have had two very open incidents in the past six months where I have had to confront and defend my boundaries with regards to people and their drug abuse, an issue I still face in my immediate family and have not found a way to constructively deal with. Early in March, while drunk, Bill had made two sexual passes at me, both of which I rejected forcefully at the time, but had not found a way to talk to him about after the incidents were over and while he was seemingly sober. It is very very difficult to talk to people who are in denial about their drug abuse and enabling, behaviors and indiscretions committed while using, or behaviors that perpetuate denial of the truth of the situation that no one wants to deal with. I wish I had spoken openly to Mary sooner rather than later, and I wish I had found the courage to deal with Bill's transgressions and drinking sooner. I just didn't know the severity of his addiction until I got there at the end of January, and in the last six weeks I have not wanted to sabbatoge the work to be done, humiliate Bill for his behavior, and also, if someone doesn't want help, or is unwilling to accept the truth, there is nothing to be said. I think the hardest thing to over come in conversation is that the person with the problem almost always wants to blame you for the incidents that erupted, and the people who are around the situation and in denial about it can't handle open confrontation or communication about a very complicated situation. There are always two sides to every story, and everyone needs to be able to communicate and accept their part and the points of view of others, but no other problems can be worked out until the drug abuse is addressed. When I came back to American from Canada a year ago I was very much in a state of delusion about my own family's problems, but through the help of the Al-anon family groups and Alcoholics Anonymous I am slowly coming to better terms in my own mind and heart with a situation that I am quite powerless to improve, and because of which I have had no contact with anyone in my immediate family for many many months. Drug addiction is "a cunning and baffling disease".

Anyways, the incident catalyzed for Scott and I a deep and urgent need to get le trailer to Athens as soon as possible. We solved the height problem by swapping out the tires we had for a smaller tire, saving about 3.5"! I took out another bank loan for $3000, we rented a U-haul and drove to Cartersville and camped for three days at Red Top Mountain State Park. We bought all the rest of the steel framing material we will need, as well as the aluminum siding and roofing material, plus all the fasteners, the lights and some needed tools. We finished the installation of the doors and windows, I put the wiring in for the lights and brakes in a very windy afternoon, and away we went! The trailer towed like a dream, straight and even, a totally smooth ride, and as I drove behind in the little white pick up I just cried with happiness! A big bright low close white full moon rose in front of us, and we arrived in Athens just as the sun was setting. We have rented a storage unit at Chase Street Self Storage for all the metals and materials, and a lot in an old brick bay for the trailer to sit while we work on it. There is no power there, so for the time being (until we get a welder/generator) we are shuttling materials back to the apartment to build sub-assemblies here at home, and then taking them to the site with the battery operated drill for installation. I am hoping to have the structure all but complete by the middle of June, and then I am off to Canada to be with Julian and then bring him here for the summer! 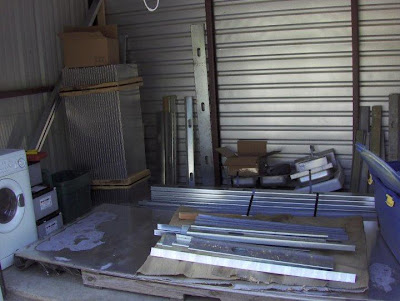 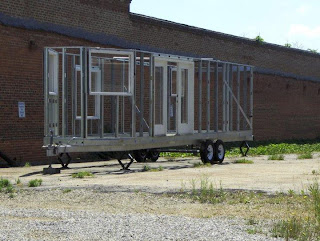 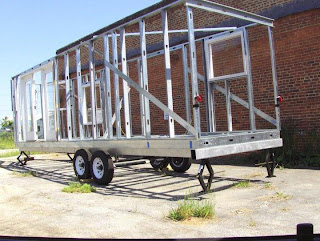 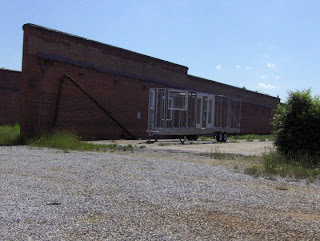 Posted by Gretchen Elsner at 9:13 AM

Email ThisBlogThis!Share to TwitterShare to FacebookShare to Pinterest
Labels: dealing with drug addiction in friends and family