I had bought a 4 burner RV propane stove/oven several years ago, and in the course of using it I realized that it was not the right appliance for me. Biking with full propane tanks is incredibly scary, using a combustible gas under pressure in my home is incredibly scary, and using fossil fuels in my daily life is the scariest of all! So, I decided to continue using my little "Super Cat" home made alcohol camp stoves for very modest cooking while I saved up my money to buy an alcohol stove/oven. This was no small feat, as the unit most recommended and suited to my needs costs $1500.00 new. I trolled the internet for months while saving, but the Origo stoves are of such high quality, and last so long they they very rarely are re-sold. I am now the proud owner of a new one! In my opinion it is worth every penny.
The way that the final transaction came together further cements that I have made the right investment in my home, and in a fossil fuel free future. I was walking downtown not too long ago and was attracted to the cheerful pop tunes rendered by this wacky duo. I turned around and what did I see but the Edna Lau, the Free Tea Bus! I went inside and met Guisepi, the Tea Man, who has been traveling the country for 11 years in Edna, building community, serving tea and living off grid. Edna is veggie grease/solar powered, and many other amazing tricks of energy conservation have been/are being genius-tinkered to perfection by Guisepi as he travels, learns, and grows. 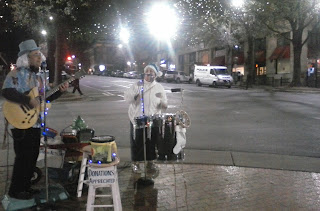 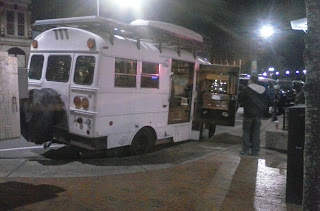 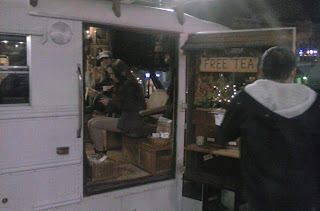 I was pretty embarrassed when I sat down inside the bus and started drinking my tea.. all the angst, cynicism, anger and despair I have been suffering from in the past few months came tumbling out. What a way to make a first impression. But, he received what I had to say, as did the other two people there at the time, with the simple reassurance that my pain and suffering is justified, that I am not alone, and that I am also not alone in living in an alternate reality: one of radical personal responsibility, gift/sharing economy, and a fossil fuel free future.
The truth is that I am furious. I am lonely. I am outspoken and I have recently been fiercely criticized for being these three things. There are loads of people who know that our self centered consumptive life styles are driving the 6th mass extinction of this planet, driving the endless wars for oil, now Exxon and the corporate criminals are literally running the government, polluting our waters, lands and air, drowning the oceans in plastic, causing cancer and a whole host of other health calamities, melting the polar ice caps, sabotaging the future of survival for our children and grand children, and dooming the millions of animals and plants we share this one precious world with to suffering and death. There are loads of people who know that these things are all true, and yet, they do nothing. They do nothing in the sense that they do not change their lives. They complain, they organize political meetings, but can't organize a car pool, they say they are religious or spiritual, but there are no solar panels on their church, and they don't car pool to church either. They gorge themselves on meat and dairy two or three times a day. They keep buying everything they want wrapped in plastic and think that recycling it is enough to off set their having bought the plastic wrapping in the first place. They plunk a drinking straw down in a glass so their lips will never have to touch the glass, which gets thrown out with the other 8 million straws a day. They think bringing a shopping bag with them is a inconvenience, or they just forget. They justify their driving everywhere they go because biking is dangerous, or they have to haul whatever, or they have kids, or they live to far from work and it would take longer, or they are out of shape. They don't install on-demand hot water heaters or solar systems, because it's too expensive, they don't seek out real news but just let themselves be spoon fed the blustering propaganda of the corporate media, and they jump down my throat for expressing my fury.

I have recently been called a self righteous, judgmental hypocrite, told that it's a personal choice if someone is going to ride a bike or recycle, or go vegan, or that I am making friends into enemies by saying "Hey it's lonely out here! If the people I would call friends rode bikes too then we could smile and wave at each other as we pass on the street!"

The fact of the matter is that it is not a personal choice, and thinking that it is IS the problem. I don't have the grit and determination to live the way I do on my own, I need to be a part of a community just like everybody else, even more so as I continue recovering from the injuries of last year. "Enemies" is too strong a word, but "not friends/not allies" is about right. Could I be friends with, trust, rely on someone who drank heavily everyday when I don't? It's the same type of thing. Thinking it is a choice to live a heavily addicted life style that is killing our whole world and then saying "it's my choice" is just as sick to me as a parent who keeps drinking even though there is no food in the house of their children, or who has lost their licence to DUIs, with a spouse who is black and blue from the latest drunken rampage.

Fossil fueled lives are addicted lives. The signs that our world is suffering are just as glaring, and I am not being a hater for calling it out. It would by hypocritical of me not to, in my opinion. To know and to do nothing, to say nothing.  I could no easier shut my mouth if a friend had contracted a STD, had abortions, had children out there in the world they had nothing to do with and complained of trying to find true love. I would say : "True love is not your #1 priority, CONDOMS YO!"

To KNOW and do/say nothing because I don't want to hurt feelings, or, even more shallow, I want to be liked, while meanwhile....mass extinction, how could I? Where would my courage be? My Fortitude, my integrity? There are no points for winning the popularity contest at the end of the world. While those who KNOW and do nothing about it bicker about whether it is PC to talk about whether it is okay to talk about whether it is OK to know and do nothing the powers that be are working over time to meet the demands for our supposed needs, leaving a trail or wreckage and destruction across the poisoned landscape, and making billions of dollars doing it!

So, meeting Guisepi and getting to spend some time with him while he has been here in Athens, all be it very brief, has been a shot in the arm of courage and fortitude. I shared this blog with him and he came out to visit my house. He picked up Katie, who I met at a "Tiny House Class" I taught in November/who is building her own tiny house, and brought her along to buy the propane stove I no longer need. Thank you so much Guisepi. Thank you! 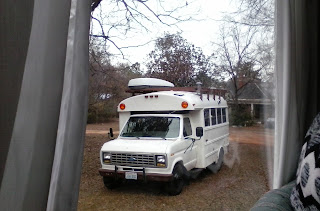 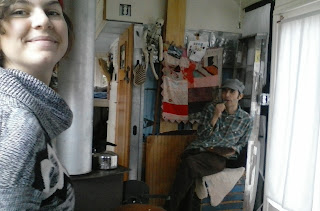 Many prayers have brought many blessings. I am incredibly grateful to have had the guts to pursue what is right, and that I am not alone in this work. I am so grateful for the peace and tranquility to have created the space to absorb the suffering and pain we are collectively inflicting on the world, and to have to opportunity to try and transform it creatively. I am so grateful that somehow the care and loyalty that I have been unable to lavish on a family has instead found consecration instead in my ethic of care for the world, and that there are still endless opportunities to follow this inspiration with action, with a community. I am always ringing my prayer bells in gratitude. 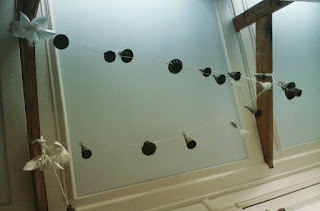 Follow up: 1/21/2017: Made some good old fashioned American Comfort food ahead of the J20 march yesterday and the Women's March today: VEGAN!!!! Not-Chicken Dressing and Pear/cranberry pie! This little oven works GREAT! 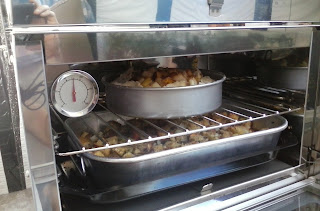 Posted by Gretchen Elsner at 10:48 AM